My S.M.I.L.E. experience began during my first semester at Acadia in 2010. Since then, I’ve graduated from Acadia twice, with a B.Sc.H. in Biology (2013), and M.Sc. in Biology (2015). While I have hundreds of stories that I’d love to share from my 5 years with the S.M.I.L.E. Program, they can be summed up in only one. I came to Acadia in my second year of university as a transfer student from a much larger school in southern Ontario. I heard about the S.M.I.L.E. Program just before I decided to make Acadia home, and it definitely helped seal the deal. As a matter of fact, I remember first hearing about the program and thinking that it was too good to be true – I couldn’t believe that this volunteer opportunity was being offered to students! And so I got involved, first as a Tuesday/Thursday Instructor working with 2 children with autism, and then as a Leader and Student Director for 4 years on Saturday.
I remember reading my buddy’s files and being absolutely terrified for the first day. The words and terms in their files were going to manifest themselves into an actual child… that I would be responsible for… for an hour…. in the pool… each Tuesday and Thursday. Well then! I remained optimistic despite thinking that I was far underqualified for the position. I had babysat a few children with special needs in high school, but S.M.I.L.E. isn’t about babysitting. We were expected to make physical, cognitive, and social goals for our buddies each week and try our best with our buddies to achieve them. And then came my first day. Hailey was a vibrant 9 year-old with low-functioning autism. Communication was very difficult, but that paled in comparison to her sheer terror of the pool. For the first few weeks, I attempted a gradual approach of getting her in the water: Step 1, sit on edge of pool. Step 2, splash feet in pool. Step 3, oh shoot – Hailey is running on the pool deck again! I expected a challenge at S.M.I.L.E., and Hailey was just that.
The difficult part for me that year was looking around the crowded pool and seeing friends with buddies that were making tangible progress each week, while Hailey and I struggled to even get in the pool. A few weeks later, I discovered that Hailey was terrified of the water because of sharks and the Titanic. I recognized that I probably wasn’t going to be able to convince her otherwise by the end of the semester, and so I changed my approach. Instead of setting unrealistic physical goals for us to accomplish in the pool, we would work on activities on the pool deck and shifted our focus to more social and cognitive tasks. I decided to offer Hailey a deal: if she went down 3 stairs into the pool, she could choose which jump I would do into the deep end. Immediately I could tell that I had sparked her interest. So in she went, up to her knees, and out she came to big applause from myself and some of the S.M.I.L.E. Leaders, before taking a dramatic bow to finish off her performance. We laughed and cheered hysterically before she insisted I jump into the deep end like a cannon ball. And so I jumped in, only to find Hailey throwing balls at me from the pool deck as I surfaced. She was yelling something at me that I couldn’t quite understand… “FSH! FSH!”. And then I realized… my 9 year-old S.M.I.L.E. buddy was playing fetch with me, and I was the dog. But I wasn’t mad, I was ecstatic! We were playing together, and she took initiative, and she was communicating! I felt as though all of our hard work paid off that day, and I smiled and proceeded to tell all of my friends as if we’d won a gold medal. On the last day that semester, Hailey gave me a card she’d drawn that roughly said “Dear Jukie, thanks for playing on the pool deck with me.” I finished that semester as happy and proud as any of my friends who had taught their buddies to swim, because Hailey’s progress was just as monumental compared to when we started. That year at S.M.I.L.E., I learned so much about not only perseverance and positivity, but also the danger of comparing yourself to others. I changed my attitude to work on becoming my best version of myself, and my buddies becoming their best version of themselves. I think that this perspective contributed greatly to my success as a S.M.I.L.E. Leader and Student Director for the next 4 years. 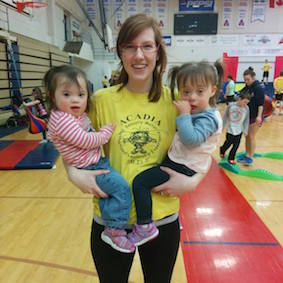 Julia Whidden
When I first applied to become a Saturday S.M.I.L.E. Leader, I thought that I would miss working 1-on-1 with the kids. While I certainly do miss that aspect, the opportunity to guide and assist Instructors through their own challenges was amazing, and it gave me the chance to get to know more of our incredible kids. I remember showing up to S.M.I.L.E. Leader training in September and feeling like they’d mistakenly invited me to some sort of family reunion. As people entered, everyone was giving hugs, talking about their summers, and quite obviously excited for what was to come. Kevin Duffie ran the training, and gave out prizes for various tasks. I won a prize for being the first Leader at training, when in actuality I just got the time wrong and showed up embarrassingly early. My prize was a yellow foam ball with a big smiley face on it, and I’ve kept it ever since. It reminds me of my ‘induction’ into the S.M.I.L.E. family, a group that has supported and encouraged me through 5 years of university and countless Saturday mornings. These friends have since graduated and are all doing positive work in their communities, but every time we speak I hear the same thing, “I miss S.M.I.L.E. SO much, you really don’t realize how incredible of an opportunity it is until you leave Acadia and find out there’s nothing else like it – anywhere!” And this is so true. During my first year of S.M.I.L.E. as a Tuesday/Thursday Instructor, I remember the then-Student Director Kerry Worbets telling us all that we would never again be handed a better opportunity than S.M.I.L.E. to give back to our community, and for personal and professional growth. She was so right.
When you distill down all of the goals, reflections, meetings, and activities, I think you’ll find that S.M.I.L.E. is about both making friends and being a friend. You will be challenged, but you will also get that amazing rewarding feeling when you and your buddy accomplish something new. You will probably be terrified at first and feel completely unprepared, but that will change. S.M.I.L.E. will become the highlight of your week, just like it is for all of our kids. It is a community that will give back to you just as much as you contribute to it. You will learn and laugh, play and teach, be pushed outside your comfort zone, and probably cry (because there’s something in your eye…) when you have to say goodbye. S.M.I.L.E. will become the hallmark of your Acadia experience, and you will be a better person because of it. I can’t possibly quantify the impact that S.M.I.L.E. has had on me, both as a person and as a student, but I will say that the positive and supportive environment we try to create for our kids will rub off on you. In teaching our buddies to not feel defined by their disabilities and to be themselves, you will do the same. S.M.I.L.E. gave me the confidence to appreciate my individuality, and to live my life with an unwavering acceptance of diversity. S.M.I.L.E. helped me become my best version of myself, and for that I will be eternally grateful.
To all of the Instructors, Leaders, Student Directors, and Program Supervisors that I have had the privilege of “working” alongside and learning from, thank you. To all of the kids, whose spirits and smiles got me through university, I am so happy to have met each and every one of you. To the families who came from near and far to share your incredible kids with us, thank you. And finally, to our S.M.I.L.E. Queen, Dr. Roxanne Seaman, who’s passion and enthusiasm inspired our team to be our best every Saturday morning at 7:00am, thank you.
With love,
Julia Whidden
Saturday S.M.I.L.E. Student Director, 2013-15

I just cannot thank you enough for Mick. There was an instant connection from both ends and George looks forward to S.M.I.L.E. every week and has done exceptionally well this semester.
I am sure you are aware of the difficulty George had at the pool last year. This child who used to run around the pool crying, and not wanting to go in, now looks forward to pool time with so much of anticipation, just because of Mick. He also dreaded the deep end, but is now swimming in the deep end throughout the whole session. Mick has helped George transition really well. George started off needing assistance getting in the pool and within a few sessions Mick has managed to get him to go into the pool voluntarily. It was remarkable watching George succeed in such a short while.

Mick has done an excellent job with George. He is good with raising concerns, coming up with ideas, asking for my opinion and implementing them rightaway. Mick is amazing and I could not have asked for a better instructor for George.

S.M.I.L.E., I would like to thank you once again for all that you have done for my children and what you do for the community. My boys are very happy after the program every weekend and we go back home content and happy parents.
Thanks!
Patricia
S.M.I.L.E. Parent
Also of Interest: